Hello from probably about as far away from the UK as I can get. I have been in Tasmania now for just over a week and life has severely slowed down, but this kind of pace I could really get used to. There is something about Tasmania already that is making me love it, maybe it’s the unpredictable weather, maybe it’s the fact that there are mountains everywhere as well as lush green countryside, maybe it’s the laid back atmosphere, maybe it’s all of these things put together.

I have managed (somehow) to change to Australian time fairly easily. Having hardly slept on the plane (maybe 3 hours) I think by the time I went to bed I had been up for 36 hours or so. I ate from a local curry place and came back to the dorm and crashed out. Since then I have been up when it’s light and asleep when its dark which is a great thing, no real idea how I have changed so fast but there you go. Since I have been here I have continued to work on my story a bit, 11,000 words done, no idea how to get the story to do what I want it to do but I’m still writing which is important. I will say that Australia is expensive. Fruit and veggies especially feel overpriced but maybe it’s just the fact I’m not used to it as yet and not sure about how much things cost on average. I have all but given up drinking in order to save money and really started to cook for myself. Hobart itself is a nice little town, it has a beautiful harbour and surrounded by hills and looked over by Mount Wellington that I decided to climb in the pouring rain. It’s odd because before then there was 2 days of beautiful sunshine and I choose to spend those mostly in the library researching how to get to some of the places I wanted to get to with no real luck. Still I managed to figure out what to do next and so I made plans for that instead.

I still have not managed to totally shift my cold/cough, it’s hanging on in there but I am fighting it with drugs and well cooked food. The Hostel in Hobart was nice, lots of options and nice people with a big kitchen, I actually managed also to make bread in the Hostel which went down a treat with me and the other people that I was sharing a dorm with. I managed to once again attract a weirdo, I wonder why this always happens to me? A few nights ago I was sitting chatting to my roommates when a little a guy comes up to me and flicks a bit of paper at me. He mumbles something like “it’s not nice to take the piss out people, having a paranoid problem” and stumbles away. This is what I would call a common psychosis which I think was induced from too much consumption of cannabis, the thing that always makes me wonder what is going on though from all the people that was sitting at the table why was I the one he chose to be weird at. It’s like I have some sort of crazy pheromone that attracts other crazy people, still no harm was done and I shrugged the whole thing off.

I have managed to have a few of those moments that no matter how many pictures I take it just will not do the whole thing justice. The first of which was climbing up Mount Wellington (1,271m) in the pouring rain, being hot and sweaty from the exertion of energy but completely drenched too. There was a point where we came into a clearing and above us the mist of the clouds loomed over the top of the mountain, we trekked right into them. At the top of the mountain there is a viewing platform, we stood no more than 10 meters away from it and could not see it at all due to the low cloud and mist. The next one was arriving in a place called Coles Bay, I stayed here for 2 nights so that I could take in the beauty of Wineglass Bay in a walk, the place where I stayed was like a small holiday resort, a few minutes walk from this resort is a beach and considering I was only there with one other person (a fellow traveller) it took my breath away, the water was beautiful clear if a bit chilly to swim in. The sand also of really high quality and just the sound of the ocean and the smell of the waves, of course I had to go in and have a swim and don’t regret it one bit. Just to the left of the bay there are the three hill tops, made from pink granite that change depending on the light. A complete change from Hobart that began to feel like I was on some sort of desert island, I could get used to this. 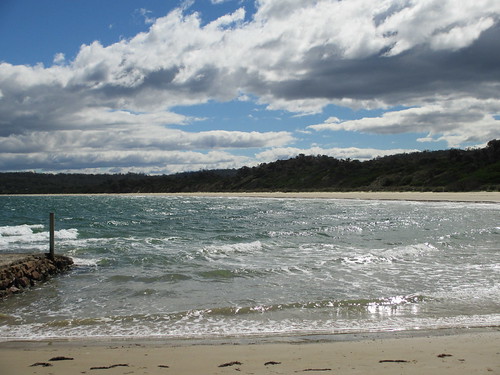 Oddly enough I went into a bakery in Coles Bay and I said how awesome their ovens are and told them that I bake a small amount from home. Believe it or not they pretty much offered me a job there and then. I of course told them I would love to but can’t due to the fact I am on a tourist visa however if we could arrange something so that I can stay longer than 3 months I would totally come out here for a while and work in a bakery, life would be so simple. I might see what I would need from the Australian government to do this, maybe they need to sponsor me or something, this might be worth a call to immigration just to see how I go about doing this. As soon as I get a reliable Internet connection I will try to do this.

It’s only maybe another week or so and I jump on the boat over the water to Melbourne. Trying to find people to travel with has been made tricky because of the lack of internet access here but I now have an Aussie mobile which I can use to contact people when I am out of the loop which is cool. I tried to use the CouchSurfing website and so far have had really no luck at all and maybe because I still blatantly refuse to put any information anywhere near Facebook. Everyone I got in touch with didn’t respond which really does not make me think very highly of the site. You have to put in quite a lot of effort for it to begin working for you I think and at this point in time I don’t have enough access to the internet for it to work. I will keep trying once I get better internet access.

I love this island in general, it feels remote, it looks beautiful, has some great cycling available that makes me want to come back here with a bike. I can see myself seriously falling in love with the clean air, beautiful seas, amazing views and slow lifestyle for a while.