If you have not read part 1 of this dual post then I advise you do that first.

Happy Birthday to me, yes we pick up our story on the morning of the 11th May where I turned a year older, it was Sunday and there was a Marathon scheduled through Prague. My plan was to avoid any crowds that may be gathering for that and have another long walk heading up the hill and towards the castle grounds. Today I went totally mapless too, I think I had learned enough about Prague to get me to the places I wanted to be during the day and it worked. Somehow I have learnt this city, I think this is a bit of a skill as I have been able to learn places very quickly. Walking through Prague is also a brilliant way to work off all the hearty dumplings and meat heavy diet, especially if you decide to climb the hill once or twice. Today was also about taking things slow, taking the time to appreciate where I was and to spend some time doing some of the tourist stuff.

At the top of the hill I eventually found the lookout tower. You have to pay to climb the tower a fee of 120Czk which is not that much, and since I am still trying to challenge my fear of heights, taking on a man made tower would push them nicely. For an extra 60Czk you can take the elevator which is small and cramped housing possibly 5 people at most but since I had a lot more walking ahead of me I decided to take the elevator up and the stairs down. At the top of the tower I gave myself some time to stop my body from panicking and then took in the beautiful view over Prague. From here you can also see the cathedral, most of the central city and get an idea of just how big the castle grounds are which I believe are one of the biggest in Europe. I got my bearings at the top of the tower and planned out a route to head down towards the main castle which was my next stop. 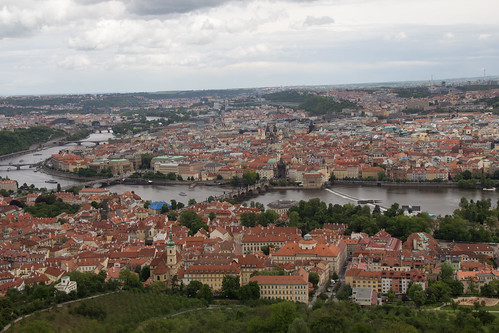 Taking on a leisurely pace you can get up to the main castle in around forty minutes but be prepared for both down and uphill. An alternative is to use the funicular railway which climbs up to the top of the park, you will still have to take on a few hills walking back up to the main castle unless you take a bus. There are several payment options for the castle for the unwilling/poor you can happily walk round quite a lot of it without paying which includes basic entrance to St Vitus Cathedral. My mega tip for this is to invest in the big 350Czk ticket which is actually valid for two days and then take your time splitting the attraction up a bit. I learned about this after I threw away the ticket I had, but I managed to see most of it a day. Had I known about the second day I would of loved to of gone back.

Leaving the castle I walked around a bit more, slowly making my way back into the centre of the city taking in some late lunch on the way. I walked all the way back to to the Muzeum metro station just to take a photo of the magnificent building. Coming in from a backstreet I heard music playing in Wensless Square, this is not an unusual thing. Over the weekend I heard several musicians here and there were several music stands set up around the Marathon course. I soot and listened a while, the tune they played was happy and a few people danced gleefully around and then I noticed the flag with a familiar name on it “Ježíš”. I was absorbed by their carefree dancing and tried to capture it on film by taking a few photos. I may not necessarily agree with whatever religion they were celebrating but there was certainly something joyful in them and that made me and my heart smile. I’m not sure if they come over in pictures but these people were lost to their cause and I get that. I too get totally and utterly lost while dancing to music that I love, it’s not about looking good but more about being in the moment and letting the joy fill your heart, deeply philosophical I know.

I went out for dinner as per usual and then a random walk which put me on the doorstep of Chapeau Rouge a lively place during the week but fairly dead on a Sunday. I took in a beer here minding my own business at the bar then left to see if I could find anything before heading home. I walked past a place that caught my eye only once I had walked past it. Harleys sounded like my kind of place so I walked in. Around 6 hours later I walked out of not entirely sure I knew the way back to the hostel, tired having danced the night away with some randoms.

The evening was not without incident though, I had fun getting lost in the music in a similar fashion to the worshippers I saw earlier in the day. I know this may sound odd but sometimes I really don’t associate with male related behaviour, in the club two girls were on some sort of quest for attention and they managed to get what they wanted and for that I probably should applaud them. Now I’m not sure where feminism lies on this but again I’ll tell you what I saw. One of the two girls was certainly not playing hard to get, she perched herself for most of the night on the bar. Yes, not at the bar but on it. The place was getting busier as the night went on and men were flocking to her. Now it may be because of my introverted nature that I find this kind of “look at me” behaviour abhorrent. I know when people are watching me and yes I may act different when they do but the behaviour I saw from this lady was very foreign to me and quite difficult to be around. I would like to know where feminism stands on this. She was on one hand using herself and her perceived position of power to play with men and doing rather well at it. On the other hand she probably does not have to do much to attract men because they are in general simple beasts and the majority can be controlled easily. I was more than a little changed by her presence that is for sure. Not because I found her beautiful but more because I found her behaviour difficult to be anywhere near.

When I got back to the hostel it was light and I semi-congratulated myself on being able to still pull off a stunt like this at 39. I spent that day I catching up with sleep and repairing myself from a slight Becherovka and beer flavoured hangover so nothing really happened apart from I ate way too much for dinner. The next day I was due to check out and so I stored my bag in the hostel while I had another walk around the city. Prague during the week is very different from the weekend and if I ever came back I would choose the beginning of the week to get here. My last few hours in Prague were spent just wandering, and ended up somewhere on the other side of the river. Here I found a poster that grabbed my eyes and led my up into a small gallery on the third floor of a building. Up in the gallery was the works of a Jan Saudek having never seen his work before i only had the poster to go on and there was something about it that drew me in. I don’t claim to be an art critic of any kind but I will say that I tend to like the more obscure, slightly dark and potentially erotic style of art an Jan fell right into this category. You can see for yourself on his website, have a look through his work but there was something about his work that I really liked.

On my way back to pick up my bag I found a little food market and endulged in my final bit of Czech sausage and a beer before getting my bag, grabbing a coffee and heading for the airport back to the UK. So yes I had a great time in Prague and I could easily go back there and experience more of it and the surrounding area, I can see why a lot of people want to go but I urge you try and understand the country a little and not just abuse it because you can get more for less. Have a look at the full set of photos I took and go yourself some day.